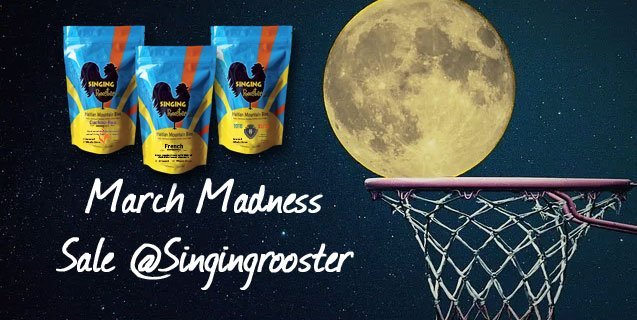 Remember how last month you were thoughtful & spent all that time (and money) buying gifts for others?

Indulge in our totally mad offer where Haiti’s small producers win :  we switch up the specials from year-to-year… so check out the deals on Haitian coffee & chocolate here.

The winning school wins the actual court.  Wood is auctioned off to fans.

Only once have all four #1 seeds made the final four.

UCLA has won the tournament a record 11 times.

Lady Vols have been to the Big Dance every year since the women’s tournament was introduced in 1982.

Only eight teams competed in the first NCAA tournament.

Many schools refused to allow blacks on teams until after Texas Western became the first team with an all-black starting lineup to win the tournament in 1966. They beat Kentucky, an all-white squad.

The tournament record for most points in a game has stood over 40 years.In 1970, Notre Dame shooting guard Austin Carr scored 61 points in a first-round win over Ohio.

Northwestern is an anomaly among “power six” schools because it has never made it to the NCAA tournament. Update: The Wildcats received their only invitation to the NCAA Tournament in 2017, after 78 straight years without a bid.

If you’re a March Madness junkie – then you’ll love reading about this tournament. Then buy Haitian coffee online because #yourcupmatters.