We’re Singing Rooster  — a social enterprise nonprofit who means business.   We sell roasted Haitian coffee, art and chocolate online.  Looking to roast your own Haitian green coffee.  We do that too.

We chronicle a (brief) History of Haitian coffee here.  We’ve been working shoulder to shoulder with small producer farmers for over a decoade (we’ve seen many come & go… we’re still here).  Please enjoy our work, then buy coffee (it’s how Haiti will dig itself out of a really big hole).

Haitians have been growing coffee for over 250 years.  At one point, it was one of the largest suppliers of the world’s coffee.  Now, few know it exists.  Same goes for their world-class cacao (raw form of chocolate).  We’re changing that.  We’ve been directly supporting Haiti’s small producers since 2009.  Join us. 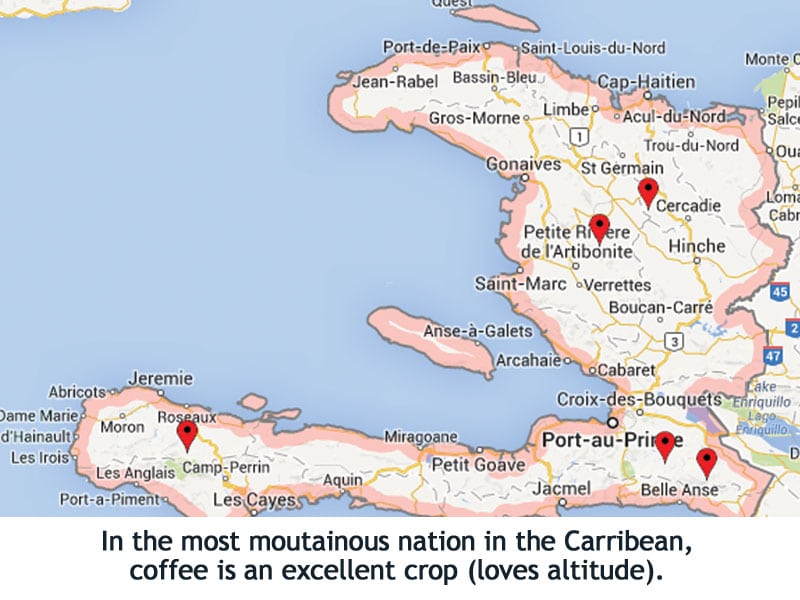 Coffee grows in abundance all over the island – employing thousands.

A (brief) Background on Haitian coffee —  Haiti is a small place – only slightly larger than Vermont. Plus, 65% of Haiti’s land is vertical. Haiti is the most mountainous nation in the Caribbean.  Most crops don’t do well in such conditions.  The exception is coffee. 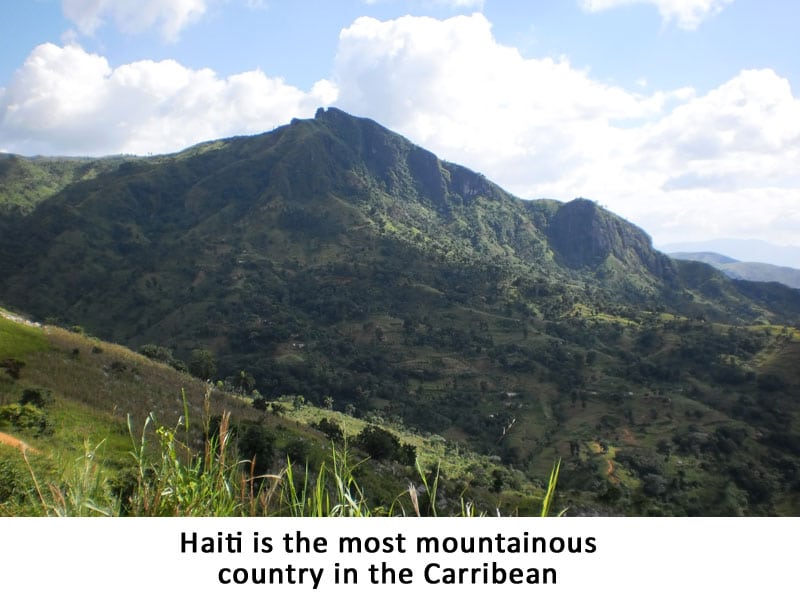 Coffee Trees Thrive in Haiti :  Mountains aren’t good for most agriculture, but they’re IDEAL for coffee; coffee trees thrive in moist but well-drained soil at high altitudes. The higher the altitude, the bigger/harder the bean, the better the coffee (the more it commands on international markets).

Coffee trees are actually shrubs, flowering once a year

Coffee = Income + is Environmentally Beneficial  Because coffee trees are water-intensive, they grow best in the shade or taller trees. Fruit trees provide ideal canopies because it’s an additional food source. Moreover, coffee plays an important role in the reforestation of Haiti.  Because coffee provides income, their taller, shade-providing companions won’t be cut down. 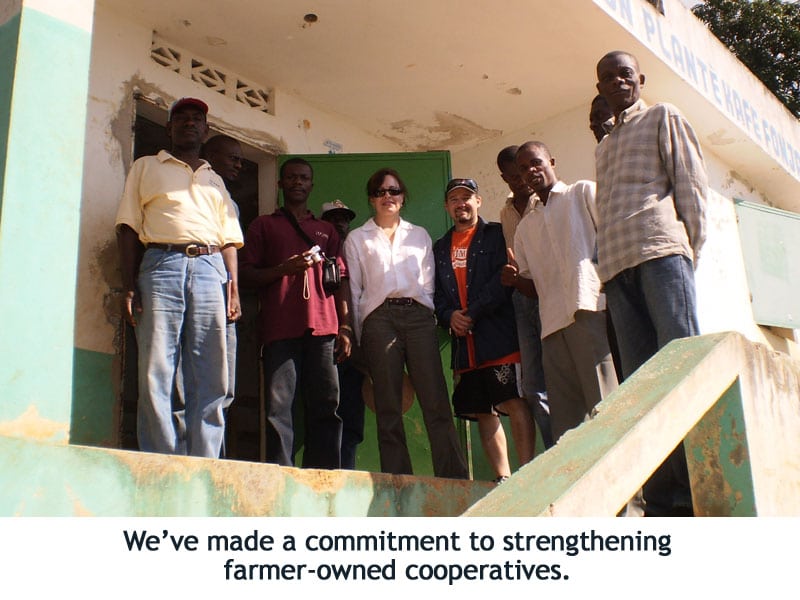 Farmer Owned Co-ops : Although small, Roosters are tenacious. We’ve built a network across the island with small-scale farmer cooperatives; we source coffee and now cocoa from all major regions in Haiti. 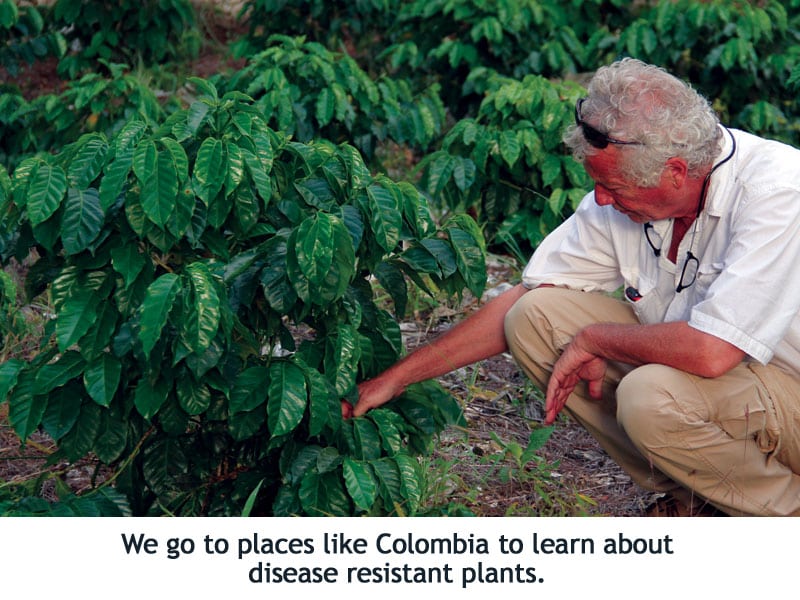 Before Europeans arrived, Hispaniola was an island of splendid rain forests and fertile plains. Native Caribbeans inhabited the island for centuries before Columbus arrived in 1492 –an Italian hired by the Spanish for greedy rulers.

The Spanish, and soon after, the French, saw a land of opportunity. Spain and France fought over the island, and the French lost.  They divided Hispaniola in 1697 where the western 1/3 of the island became Haiti, ruled by the French.  The other side was ruled by Spain – present day Dominican Republic.

A French naval officer brought coffee seedlings to Martinique around 1720. Those sprouts flourished, and 50 years later there were 18,000 coffee trees enabling Jesuits to spread cultivation to Haiti, Mexico and other Caribbean Islands.

After the native population was decimated through warfare, slave labor, and European disease, people were kidnapped by the tens of thousands from Africa and shipped to the island for slave labor.  Somebody had to tend to the new sugar plantations, indigo processing, and most importantly, the coffee fields

Many believe it was the world’s taste for coffee that lead to massive slave labor in Haiti. 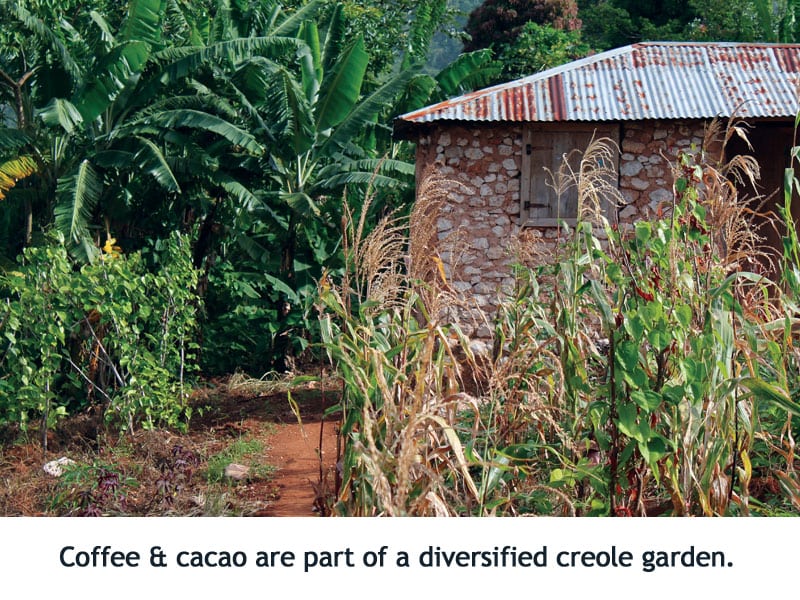 Dreadful slave conditions and brutality resulted in the first successful slave revolution in 1804. After independence, coffee remained one of Haiti’s major export crops, peaking around 1850. In the 1940’s Haiti’s coffee sector made a brief comeback where in 1949, Haiti was the third largest coffee exporter in the world. Thereafter, like before, coffee production and exportation made rapid declines.

Since 1950, Haitian coffee, once again, has been forgotten for many reasons:

Seeds for an upswing in #Haitiancoffee production were planted in the 90’s when better coffee processing plants were developed. Ensuring growers a good price by cutting out local middlemen and selling directly to the United States also made things better. Furthermore, training in land management, shade canopies and coffee seedling programs launched practices that, today, are bearing fruits of long and hard labor.

In spite of near collapse, coffee continues as a backbone of Haiti’s economy; Haitians have a resiliency to weather, corruption and political unrest.  Want long-lasting impact in Haiti?  We make it easy –